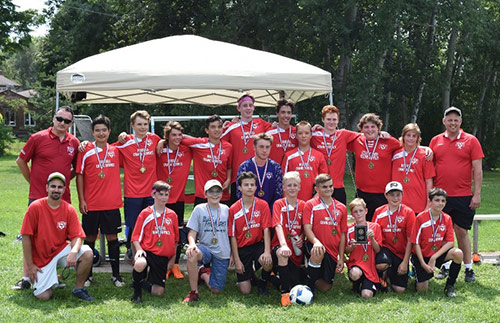 Markdale Russell Crane U15 Boys Champions In The Lakeshore Cup!

After finishing second in the regular season, the Markdale U15 boys played undefeated in the Lakeshore Cup, hosted by Saugeen Shores this year. Although having a few key players out with injuries, the Markdale boys fought hard and played well. The first game on Saturday Aug 11th was against Hanover. After regular time, this game was tied 1-1, with the lone Markdale goal scored by Dejan Lukic. The boys went into a 5 person shoot out. With Aeson Uhrig staying strong in net, the shootout resulted in a 4-4 tie after 5 shots. Jason Gordon scored the winning goal as the 6th shooter with Markdale winning the shootout 5-4. Game two was a win against West Grey 3-0. Shut out for Aeson Uhrig. Goals scored by Lucas Dias, Ashton Russell and Seth Swartz.

Markdale met Kincardine again, who won a play off, in the final. This time was no different, both teams fought hard, but Markdale came out with the win 3-2 and won the Gold medal and Lakeshore Cup. Matthew Grootendorst scored all three goals. Markdale was undefeated throughout the entire tournament, a great accomplishment for the players and their coaches.