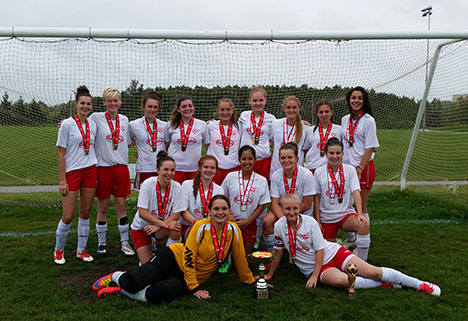 Markdale Tim Horton’s Under 16 Girls Rep Team Wins It All!

The Markdale Under 16 Girls Rep Team completed a clean sweep of the S.W.R.S.A. (South West Regional Soccer Association) Rep Soccer this season by winning both the League Championship and the Playoff Cup!

These girls finished the regular season with only 1 loss in their 14 game schedule, competing against other rep teams from Kitchener, Fergus, Guelph, Erin-Hillsburgh, Owen Sound, Cambridge and Shelburne. They led the league in goals for (51) and goals against (11) and shut-outs – Morigan Hooper (with 9) and had the leading goal scorer – MacKenzie Robbins (with 20 goals). The girls carried their first place finish into the play-offs, going undefeated in the Championship Cup this past weekend in Waterloo, with wins over Kitchener (3 to 0), Guelph (3 to 0) and they shut-out 2nd place Cambridge 2 to 0 in the Championship game to capture Markdale’s first ever Rep Championship Cup! Well done girls!