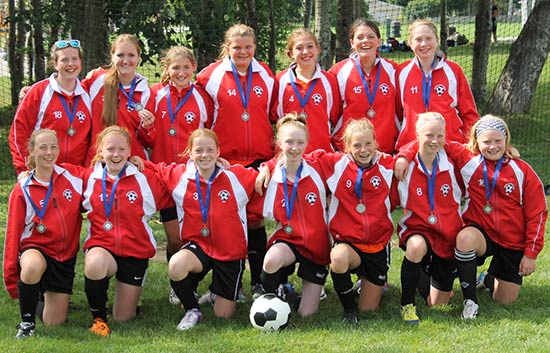 The Markdale U14 girls soccer team, sponsored by Royal Lepage, Mark Murakami, Sales Rep, captured the silver medal at the Lakeshore Cup! An outstanding team effort in 3 games on Saturday had them finish first in their pool with two wins and a tie.

On Sunday morning they beat Kincardine in the semi-final game with a brilliant team effort and goals scored by Caleigh Ward and Cassidy Shortt. In the final game, Markdale faced Tara. The game ended 1 -1 and after a scoreless over time, the championship was decided on penalty kicks. An outstanding effort by Cassidy Shortt in net. Markdale finished tied for second place in the regular season. Congratulations girls!