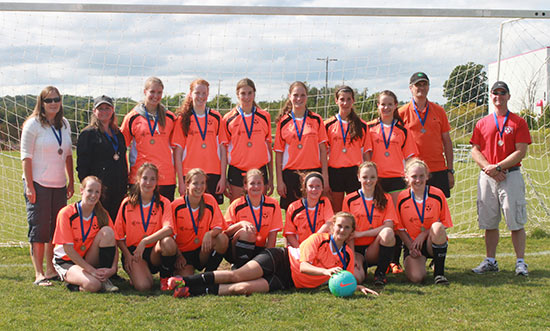 The U16 Girls Win Bronze!

Markdale Minor Soccer hosted the U16 Girls Lakeshore Cup tournament on August 16 at the Chapman’s Soccer Complex. Despite the miserable weather, the Co-operators U16 girls played hard defeating Mount Forest 1-0. Later in the afternoon, after another strong battle, the girls lost to Hanover 1-0. One win and a loss placed them in the bronze medal round on Sunday where they defeated both Kincardine Canadian Tire 2-0 and Kincardine Montgomery Ford 2-0 for the Bronze medal win. All the teams in this age group were very evenly matched this season. With a wonderful coaching staff and a great group of girls, Markdale Co-Operators U16 girls gave their all as they always do and played hard.