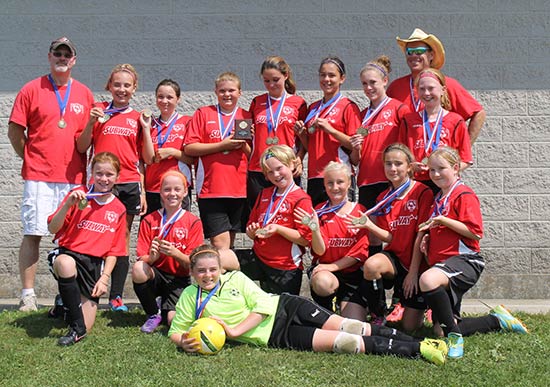 Congratulations to the Markdale Subway Under 12 Girls team on capturing the gold medal to finish off an amazing soccer season! After finishing the regular season with a perfect 10 wins, the team captured the first place Lakeshore Soccer League medals and plaque. Markdale hosted the first 2 rounds of the Lakeshore Cup and the girls continued on their winning ways. They defeated Tara 3 to 1 to start off the weekend, with goals from Nicole Neuteboom, Ashley MacDonald and Zoey Davis. Markdale met Kincardine in the semi-finals and shut them out 6 to 0. Meagan Hard led the way with 4 goals and Nicole Neuteboom added 2 more. Michaela Sadler had the shut-out. They advanced to the Gold medal game and defeated Saugeen Shores 1 to 0 in a great game. Hard had the lone goal and Sadler had another shut-out. Excellent season girls!